5 Essential Life Skills to Help You Thrive (Not Just Survive)

The other day, I met a young lady called Emily.  She is 5 years old. The life skills that this child displayed impacted me profoundly. Not just because they came from one so young, but because they were, at the same time, extremely well developed.

So, here are the 5 essential life skills that she demonstrated, that will help any person of any age not just survive … but thrive:

1. The Centre of the Universe – NOT

Remember, she’s just 5 years old. The first time I met Emily, was over lunch with her parents. They’re out from the US and we’re doing some things together in New Mexico and so we had a lot to talk about. Lunch went for about two and a half hours. When I found out that they’d be bringing their 5-year-old along, I groaned. But Emily just sat quietly, didn’t interrupt, didn’t demand attention and spoke when she was spoken to. I was completely amazed.

The second time we met (when the photo was taken – see below) was at a four and a half hour business coaching dinner at which I was speaking.  She was the only child in the room. You wouldn’t even have known that she was there. She was happy, content and quiet. And that photo by the way was taken at about 10:45 pm – way beyond my bedtime …

These days, we seem to be teaching our children (and ourselves for that matter) that they are the centre of the universe. We fuss over them so much, that they’re growing up knowing, beyond any shadow of a doubt, that everything revolves around them.

The people however that we all love being around, are people like Emily who know that that is simply not true.

One of the things that you see less and less of these days is respect. Simple respect. It seems that we think that by respecting those in a position of authority over us, we are somehow demeaning ourselves. And yet, the exact opposite is true.

Those who show respect – for elders, for parents, for their bosses, for their employees – demonstrate that they are in control of themselves.  In fact, more and more, I am coming to the conclusion that the natural capacity to show respect is indeed a marque of maturity.

That’s something that Emily’s parents have already taught her. She just gets it. It’s in her DNA.

3.  Engaging those Around You

As much as Emily is not one to hog the limelight – even though she clearly has the personality of a leader, even at her tender young age – neither is she afraid to engage people in conversation. In fact, there was a time there where I felt like I was being played by a pro! She’s really good at it – because she asks sensible questions. So much so in fact, that I kept having to look at her to remind myself that this was indeed a 5-year-old that I was talking to. It was quite remarkable.

I know adults who aren’t as good at engaging people in conversation as Emily. It’s not that hard. Just ask them questions about themselves – everybody loves to feel as though someone else is interested in them. I walked away with the distinct impression that Emily was interested in me. Amazing!

I can’t tell you the number of times people start talking to me and they expect me to understand what they’re talking about, without providing me with the context and then clearly setting out the facts.  And so I have to pull them up, find out the big picture, then basically interrogate them to get the facts on the table.  When you meet someone who does this over and over again, the strong temptation is just to stop bothering.

Now I know that some people are naturals at this. Leaders tend to have strong verbal linguistic skills and Emily obviously is one of them, even though she has the tiny, high-pitched voice that you’d expect a 5-year-old girl to have.

We all need to learn this skill. So if you have to learn it, then learn it.

Because in this world, it’s the clear communicators who thrive, while people who don’t take the time to learn the skill, are struggling to survive.

This last one blew me away. It was about 10:30 at night. I was packing up the overhead projector and my laptop, getting ready to go home.

Emily’s folks were off chatting with other people. Emily comes down the front of the room, totally of her own accord and says to me “Is there anything that I can do for you to help you pack up?”

“What about the tape on the floor? Would you like me to take that up for you?” she replies (there was black gaffer tape holding down the cables on the carpet!)

Now – this is not fiction.  This actually happened. Whether by her natural personality or through what her parents had taught her (or, most likely, a combination of both) Emily even at this age, demonstrated a servant mentality.

We know that servants make the best leaders right? But a 5-year-old?! Unreal. 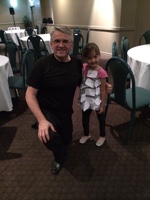 Now, is Emily perfect? I doubt it. I suspect that beyond the little that I saw of her, she – like you and me – has her moments, and her weak points.

Meeting Emily was a real wakeup call I have to tell you and a great testimony to the godly parenting that she has received over the course of her little life.

Selflessness, humility, respect, proactivity, effective communication – these are life skills that we all need to develop and refine. And why will they help us to thrive and not just survive? Because other people love being around people with these skills.

My deep thanks go to Emily and her parents – Mark and Valerie – for teaching me something about living a godly life!

I’ll be watching Emily’s development with great interest.  I have little doubt that the Lord our God has a mighty role planned for her in His Kingdom.

Startling, Definitive Research - Spiritual Growth & Victory Over Sin
Why does God take us to the edge?
Why Can't We Agree on what the Bible Says About Homosexuality?
Batman Movie - Who Would Have Thought?
Three Steps to Getting the Important Things Done
What to do When Things Don't Go to Plan