3 Leadership Lessons from the “Failed” Census

The evening of Tuesday, the 9th of August 2016 was Australian Census night. For the first time, we took the census online and, as things turned out, it was an unmitigated disaster (if you believe the press, the politicians and social media).

So, what lessons are there in that for you and me, about conspicuous failure?

Every 5 years, the Australian government conducts a census of its population. There’s nothing new in that. Hey, King David conducted a census of Israel about 3,000 years ago and if you know the story that one didn’t end so well either.

In our case, there was a DDOS (Distributed Denial of Service) attack on the census site. Some moron or morons unnamed (I say that in a loving, Christian kind of a way) launched a malicious attack to bring the site down on the evening in question, stopping millions of Australians from completing their mandatory census.

Well, didn’t the knives come out. Yep, the knives were out.

But at the same time, by all accounts, the project was seriously under-funded and under-resources as IT projects often are.

As I watched the blame game unfold, and having spent 20 years of my life on the inside of large-scale technology based change projects like this one, I couldn’t help but wonder how the members of the census project team felt. The people who had slaved away behind the scenes (making personal, family and professional sacrifices that you and I will never know of) to try something new.

Something innovative. Something that will, no doubt, go down in history as a vital stepping stone towards automated voting in our country. Something that should have earned them great praise, but, thanks to said morons, brought only condemnation.

It’s so easy to to be an armchair critic with the benefit 20/20 hindsight and no skin in the game.

So, here are the 3 leadership lessons that I take away from the “failed” census:

1.  When You Try Something New, Failure Happens

Every body’s an expert when we fail.

As we embark on that road, the journey is going to be littered with false starts and failures. Yet as we look back, what we see, albeit imperfect, is a rich journey that’s impacted other lives for good and brought us a deep satisfaction as we’ve lived out who we were made to be.

Today, we remember the Apostle Paul as the guy who wrote almost half of the New Testament. We build cathedrals in his name. But back then he writes this of his failures and afflictions …

But we have this treasure in clay jars, so that it may be made clear that this extraordinary power belongs to God and does not come from us. We are afflicted in every way, but not crushed; perplexed, but not driven to despair; persecuted, but not forsaken; struck down, but not destroyed; always carrying in the body the death of Jesus, so that the life of Jesus may also be made visible in our bodies. (2 Cor 4:7-10)

Failure happens. Get used to it. Get over it. Move on. The naysayers will always be sitting in their lounge chairs, ready to criticise you.  And you will know them by this – they’re the ones who pretty much never achieve anything with their lives.

If you haven’t read “Good to Great” by Jim Collins … get off your backside and read it. Seriously.

In Chapter 4 he talks about the Stockdale Paradox, named after Admiral Jim Stockdale, who was the highest ranking POW in the “Hanoi Hilton” during the Vietnam war. When asked about survival in that dreadful place – who survived and who didn’t and why – he came up with a bit of wisdom forged in that horror that has, through Collins, become known as the Stockdale Paradox.

Here it is in a nutshell:

Retain faith that, in the end, you will prevail no matter how hard things get  – AND, AT THE SAME TIME – confront the most brutal facts of your current reality no matter how bad they are.

In other words, never let go of that thing in your heart that drove you to try something new, something crazy, something innovative … something that’s so far out there that it should never have worked anyway. Never, ever, ever stop believing that this is what you were made to do and that eventually, it will happen.

BUT, at the same time, don’t run a fool’s errand. Don’t live in a delusion. Seek out the mistakes, the obstacles, the problems, the failures. Understand them. Learn from them. Do what you have to do to fix them. Be brutal about that, because unless you are, you will never succeed.

Our politicians are calling for “heads to roll”.

But a real leader would go and talk to the project team members. Congratulate them on their efforts. Encourage them to root out the problems and achieve I even greater things.

That’s real leadership. That’s how teams of ordinary, every day people like you and me end up achieving extraordinary teams. I’m hoping that there’s some of that sort of leadership within the ranks of our government, our public service and our business leaders involved in the project.

Over the years, I’ve been involved in a lot of large IT projects – the biggest one was valued at around $NZ 150 million and I t succeeded precisely because of that kind of leadership, despite all the “crap” that happened along the way.

Confront the hard facts. Deal with them unflinchingly. But never, ever lose hope that you will prevail in the end.

I was quite taken by a Richard Branson (of Virgin fame) quote, on the front of this magazine that I saw in a rack in an airline lounge the other day: 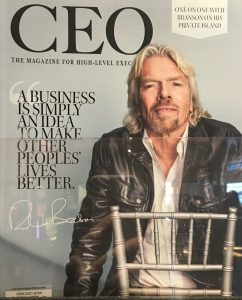 How genuine the quote is, I don’t know but the point is well made. Real success isn’t about me winning, or you winning. That winning bit is simply a by-product of doing things that are going to make people’s lives better, however we choose to do that.

Two thousand years ago Jesus said, It is better to give than to receive.

I used to think He was nuts … but after a life of dissatisfaction that came through winning all the time (and I won rather a lot in my business career) it came as a huge revelation and complete shock to me, that the contentment and the satisfaction that I’d been looking for, really only comes when I use who I am and what I have, to make other people’s lives better.

You may already have known that. For me, it was a hard lesson that I had to learn.

My hope and prayer for the amazing team (both government employees and private contractors) who slaved away at making this country better through this stab at running an online census, only to have the rug of “success” pulled from under them by said DDOS morons, is that they will gain great satisfaction from knowing that they’ve taken our country a huge step forward to something better.

The bottom line is that it’s never about you or me. It’s always about what we can do for other people to make their lives better. That’s where the quiet satisfaction comes from.

5 Essential Life Skills to Help You Thrive (Not Just Survive)
One New Project - What Are You Building?
The Ultimate Christmas Present
Fear and Courage - Two Sides of the One Coin
Christmas - Cancel or Celebrate?
Do You Seriously Want a Radically Transformed Life?